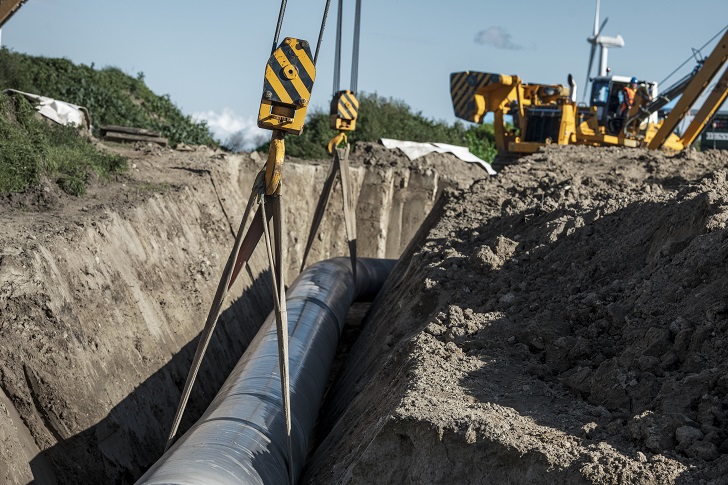 Completing the pipelines across Denmark is progressing so well that full-capacity commissioning can now be accelerated to the end of November instead of January 1, 2023, as planned. Parts of the large-scale construction have been delayed, but Baltic Pipe will still be operational with partial capacity from October 1.

On Saturday, September 24, 2022, Energinet notified the gas market that the Baltic Pipe gas pipeline can be commissioned at full capacity from the end of November 2022, a little more than one month before planned.

The delay meant that Energinet then planned to commission Baltic Pipe with partial capacity from October 1, 2022, and with full capacity of up to 10 billion cubic metres of gas annually from January 1, 2023.

“Like everybody else, we have also been affected by the COVID-19 pandemic and the geopolitical situation in Europe. On top of that, bad weather has hit Baltic Pipe hard during some periods. On this background, we are pleased to announce that a major part of the vast project has been completed and is ready for use. Due to an extraordinary effort on the part of everyone involved, we were able to lay the remaining pipelines faster than expected. Full commissioning can therefore take place ahead of time,” says Torben Brabo, Energinet's Director of International Relations.

Energinet's part of the large-scale project consists of 105 km pipeline in the North Sea, approximately 210 km pipeline underground across Denmark, an expansion of the receiving terminal in Nybro near Varde and a new compressor station at Everdrup in Southern Zealand.

“We are constructing very large and complex plants, not least in Everdrup and Nybro, and the construction work is not all. When the plants are ready, pressure tests must be completed, and we need among other things, to have the electricity, control and IT systems in place, before we obtain the necessary commissioning permits. Because of challenges associated with the technical facilities in Everdrup, commissioning from October 1 will still operate with partial capacity, and less than previously calculated. The volume of gas will be continuously increased until full commissioning at the end of November,” says Torben Brabo.

The receiving terminal in Western Jutland will have a delay of approximately one week's time, because various safety systems must be in place before the unit can be put into operation. The delay means that Norwegian gas will not enter Denmark via the new terminal during the first week. However, gas is still available in Denmark and can be sent through Baltic Pipe.

Large parts of Baltic Pipe have now been completed. The pipelines in the North Sea and in the Little Belt have been pressure tested and have all the necessary permits for commissioning. Furthermore, the gas pipeline is pressurised all the way to the Nybro terminal.

On Zealand, the pipe has been pressurised from the Great Belt to the new compressor station in Everdrup and from Everdrup to Faxe, from where the gas will be sent through Baltic Pipe to Poland.

The last sections on land – in East Jutland and in West Funen where the work was at standstill for a long period of time – will be completed in October. They will then be tested and ready for full operation at the end of November 2022.