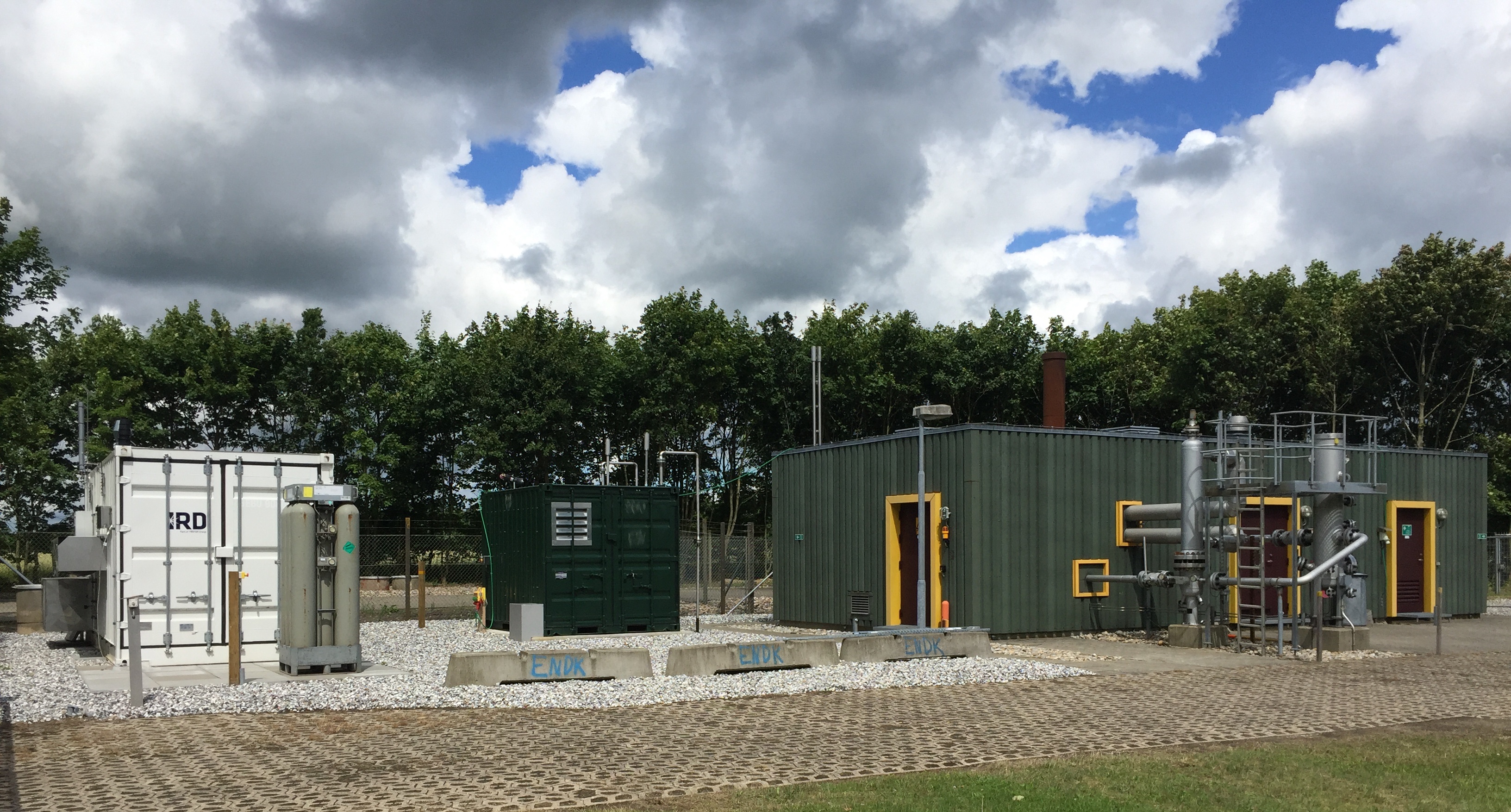 The gas grid could be an important tool to transport solar and wind energy in the energy system of the future, as the energy can be stored and transported in the gas pipelines using hydrogen as an energy carrier. Energinet is currently testing how much hydrogen the gas grid is capable of handling, and the results are promising.

The big shiny pipelines near the town of Varde in West Jutland are common gas pipelines like the ones used in the rest of the Danish gas grid, but in terms of the contents of the closed system between the two disconnected gas stations in the towns of Helle and Agerbæk the pipelines differ significantly. While the gas grid carries natural gas and an ever-increasing amount of bio natural gas, the gas in the pipelines in West Jutland is mixed with 12% hydrogen.
As part of the ‘Hydrogen injection in the gas grid’ project, Energinet is working with the Danish Gas Technology Centre and IRD Fuel Cells to test how much hydrogen the gas grid is capable of handling. The hope is to reach a share of 15% hydrogen, and the purpose is to ensure that the gas grid can play a major role in integrating the different energy systems and contribute to achieving the goal of a 100% carbon neutral energy system in Denmark by 2050.

- Using hydrogen as an energy carrier allows us to connect the electricity and gas sectors and overcome the challenge of storing energy from wind turbines and photovoltaic cells. The power can be converted into hydrogen at electrolysis plants, and once we are able to handle the hydrogen in the gas grid, we will have an extensive and efficient infrastructure in place for transport and storage, says Jesper Bruun, project manager at Energinet.

In an energy system where ever-increasing energy volumes are generated as the wind is blowing and the sun is shining, storing the energy generated by for example wind turbines in periods when production exceeds consumption becomes a challenge. Converting the power into hydrogen at electrolysis plants provides a much better scope for utilising or storing the energy for example via the gas grid. The hydrogen can be mixed with natural gas and used in industrial or transport applications or for producing electricity on days with little wind by means of gas turbines.

The gas grid is designed for natural gas which does not contain hydrogen, and when Energinet is testing the injection of hydrogen in a closed system, it is because of the small size of the hydrogen molecules compared to the natural gas molecules. Due to the size of the molecules, hydrogen carries a greater risk of gas leaks and loss than natural gas. There has been no loss of hydrogen at the test plant, however, and since the plant is built using components and pipelines of the same type used in the rest of the gas grid, Jesper Bruun is optimistic about the future prospects.

- We began the tests in the summer of 2017 using 2% hydrogen, and we have just raised the share to 12% with promising results. The results are very encouraging, as they indicate a future potential for
transporting hydrogen in the Danish gas system without having to make significant changes to the gas grid, says Jesper Bruun.

However, Jesper Bruun emphasises that studies will have to be carried out on other parts of the gas grid, and that it may be necessary to modify some parts of for example the compressors before hydrogen can be injected into the entire gas system.
In August, the hydrogen share will be raised to 15% and the entire project will be evaluated at the end of 2019.

The partners in the project are the Danish Gas Technology Centre, IRD Fuel Cells and the two Energinet companies Energinet Gas TSO and Dansk Gasdistribution.
The project is funded by the Energy Technology Development and Demonstration Programme, EUDP.