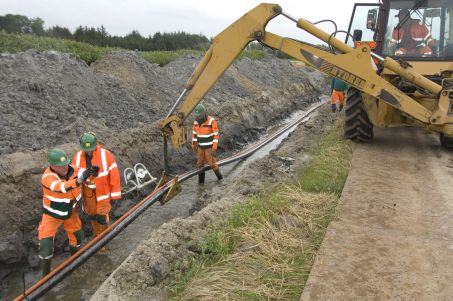 Last year, there were three serious faults in the Danish section of the Skagerrak 4 (SK4) interconnection onshore cable. Therefore, samples will now be taken of the cable. Analyses will help to determine the cause(s) of the faults. The SK4 cable will be out of operation for approximately 10 weeks.

Last year, the five-year-old Skagerrak 4 interconnection (SK4), which is one of the interconnections linking the Danish and Norwegian electricity systems, saw three serious faults that made the cable inoperable for extended periods of time.

On 6 February, 21 July and 9 October, respectively, sudden faults occurred, shutting down the connection completely.  All three faults originated in the SK4 interconnection onshore cable in Denmark.
Energinet and the cable supplier will now dig down to the cable in several places on the section and take samples to find the cause(s) of the three faults. The cable will be cut through, and pieces will be examined by Energinet, by the cable supplier and by experts from an independent company.

Sampling work will begin on 25 May and end on 28 July, and the SK4 interconnection will therefore be shut down and remain out of operation for the duration of this period.
Back at full capacity
In order to minimise the risk of further faults, capacity on the Skagerrak interconnections has been reduced from 1700 to 1450 MW since October.

- We cannot explain today what has caused these faults, but we agree with the cable supplier that we need to do a thorough analysis and learn the experts’ opinions. Only when we have these conclusions in hand, will we decide what is needed, but it is important to make clear that the SK4 interconnection must return to operation at full capacity, making trade and exports and imports between the two countries wholly possible.

On 27 February, Energinet and Norwegian Statnett published an update on their work in relation to the faulty cable, which stated that taking samples of the cable was the next step. Read the update (in Danish) here: