Rock island may become the playground of the world

How difficult can it be? To erect a large number of offshore wind turbines off Bornholm and make sure that the current can flow either to Denmark or a neighbouring country? 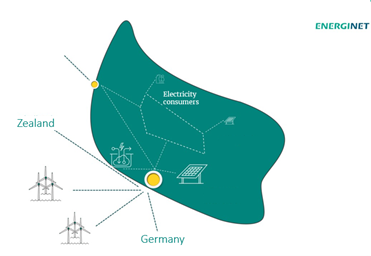 To many people, this probably sounds like a ‘let’s-get-started task’.

But for university people with deep insights into the technology needed, it is definitely not all that straightforward to construct the Bornholm Energy Island and transmit huge volumes of offshore wind power, via DC connections, to the AC grids in Denmark and a neighbouring country – or both countries concurrently. Currently, Energinet together with it's German counterpart, 50Hertz, is investigating the possibility of connecting Energy Island Bornholm with Germany and it's power system.

And if it is also factored in that the very powerful DC connections must be connected to the relatively modest AC grid on Bornholm, so that green electricity from the offshore wind turbines can also benefit the local population and so that green electricity generated on Bornholm can be transmitted to other countries, this is, in fact, not a ‘let’s-get-started task’ at all. It is more like a ‘we-must-start-research-and-development-as-soon-as-possible task’.

In fact, no one has yet gone down this electrical path.

Huge potential for Bornholm and Denmark
But for Professor Jacob Østergaard, Head of Center for Electric Power and Energy at DTU, Professor Claus Leth Bak, Head of the Section for Electric Power Systems and Microgrids at Aalborg University, and Associate Professor Felipe da Silva, who is employed in the same section, this big challenge also represents a huge potential for Bornholm and Denmark.

“If we’re the first to acquire experience with this in Denmark and we can implement new solutions in the world, the business potential will be huge. It’s really big business and a great opportunity for Denmark and the Danish wind turbine industry,” says Jacob Østergaard.

He points out that, with its unique status as a limited electricity grid, Bornholm has long been a laboratory for research and development, for example into how to create demand-side response suitable for wind power and solar energy. Projects in which Jacob Østergaard and DTU have also been closely involved and which have continuously made the world pay attention to Bornholm. “And we’re now expanding the playground that Bornholm constitutes for the solutions of the future,” he says.

Professor Claus Leth Bak agrees: “This may be the next step – and probably the biggest step ever”, he says.

Offshore wind in many parts of the world
Offshore wind power has a huge potential when countries around the world are to find replacements for coal, oil and natural gas in the coming decades. And many will be looking at how Denmark manages to harvest enormous volumes of wind energy in brand-new ways with energy islands. Because even though DC connections already form part of some countries’ current electricity systems, new solutions are needed to realise the energy islands.

Today, DC connections are often relatively isolated parts of the power grids. For example, they link the Danish power grid with the Norwegian grid via submarine cables. But the energy islands are not only to be linked to onshore DC facilities – in the North Sea, more islands and more countries will be connected to each other in the long term – and they must be able to function as one joint, stable system.

Very large volumes of electricity must also be transmitted – in full scale several times Denmark’s total electricity consumption. In addition, this must be achieved without the huge volumes of energy shaking onshore electricity grids by error, thus threatening consumers’ security of supply.

We only have ten years
“Over 100 years, we’ve built up a very extensive and highly ramified onshore alternating current grid. This is an electricity grid to which large and small power generators can be connected and from which large and small consumers can receive electricity, and where the electricity almost automatically flows to where it’s needed. Simply put, the only thing needed is a little monitoring and help along the way, otherwise the electricity grid is virtually autonomous. We’re now facing a completely different task. DC connections require precise management of where the current is to be transmitted and in which volumes,” says Claus Leth Bak, and adds that when power stations are replaced by wind turbines and solar cells based on power electronics, you also lose some of the ‘autonomous’ and robust aspects of the electricity grid.

“We only have ten years to try to create a brand-new system. It must be just as safe and stable, but we have no experience, and many of the standard components either don’t exist or they haven’t been developed for the large scale that the energy island projects entail,” he says.

Precisely the task of managing energy island electricity systems and the large volumes of energy will be the greatest challenge.

Today, different suppliers’ equipment is built up in different ways, which is fine when you just need to connect A to B and have one single supplier. But when you need to create one single joint electricity grid in the North Sea, to which new offshore wind farms, new islands and new connections supplied by different companies can be linked on an ongoing basis, it is, figuratively speaking, not good that they each speak their own language. They must be able to communicate with each other.

Increasing complexity on Bornholm
And when the electricity grid of Bornholm is also to be connected directly to the whole energy island technology, the technical task becomes even more complex, explains Jacob Østergaard:
“Bornholm Energy Island will be of 2 gigawatts. This is many, many times the consumption on Bornholm. If I’m to compare it to something, it corresponds to putting a tiny light railway wagon in front of a long goods train fully loaded with iron, which runs at 120 kilometres an hour. They need to run on the same rails only held together by a piece of rope but if an error occurs in the goods train, this may have enormous consequences for the small wagon.”

But finding the solutions will give you the key to stable, green electricity supply in many parts of the world. Explains Filipe Da Silva, who, together with Claus Leth Bak, is studying how small Indonesian islands can be connected to large offshore wind farms.

From diesel to long ‘extension lead’
“Indonesia has many large and small islands and good locations for offshore wind power. The good locations are not necessarily close to islands with high consumption, and there are many islands with very low consumption. However, you can create a long ‘extension lead’ to which the many small islands can be connected so that they can also receive green energy. Today, the small islands are typically supplied by small diesel power plants – it’s their only way of receiving a stable supply,” says Filipe da Silva.

For such an ‘extension lead’ to become a success, it is necessary to find out how to connect the strong and very weak electricity grids to each other, he explains.

Solution may go ashore in Africa
In addition to the same solutions being usable in the Caribbean, in the Mediterranean countries, in the Philippines, Malaysia etc., they may also ‘go ashore’, Filipe da Silva and Claus Leth Bak point out. For example in Africa, where large solar cell farms can generate enormous volumes of electricity which must be transported over large distances to distant consumption centres. If small communities can be supplied along the way, they will be able to drop coal and oil, and not just receive green energy, but also a stable supply from a much larger plant – something that a single local wind turbine or solar cell may have difficulty delivering.

The two Aalborg University researchers point out that some technical solutions already exist today. However, they will be way too expensive and thus, in effect, unrealistic alternatives for, for example, small islands. Therefore, there is a need for both theoretical research and real-life tests to come closer to cost-effective and stable solutions.

At close range
Precisely because Bornholm is not an artificial island located far out in the North Sea, but a community with airport, hotels, electricity grid, consumers etc., it may be possible to follow the construction of the energy island at close range.

“And you shouldn’t underestimate the value of being able to perform tests in an accessible environment – it may become a fantastic case. The outside world can get very close to the project,” says Jacob Østergaard.

He has, for example, applied to the Danish Ministry of Industry, Business and Financial Affairs for funding to create a centre for designing, testing and developing the electrical solutions of the future.

The researchers also mention the possibility of testing how hydrogen and Power-to-X can be produced efficiently. The green electricity can also supply the conventional oil and gas platforms in the North Sea with electricity to reduce their climate gas emissions.

It may become a lighthouse
The researchers agree that one of the greatest hurdles will be to create a secure and robust system.

“It’s one thing that we can make theoretical calculations and model simulations, but real tests must also be done before anyone will dare to do this on a 10GW scale 80 km out into the North Sea. It must be tested experimentally, and this is what makes Bornholm so unique,” says Jacob Østergaard.

Filipe da Silva adds: “Both research and engineering studies will be required. But Bornholm may become a lighthouse for the rest of the world.”