Together with its project partner, the German Transmission System Operator 50Hertz, Energinet has launched the world’s first offshore interconnecor by using the national grid connections to offshore windfarms in the Baltic Sea. 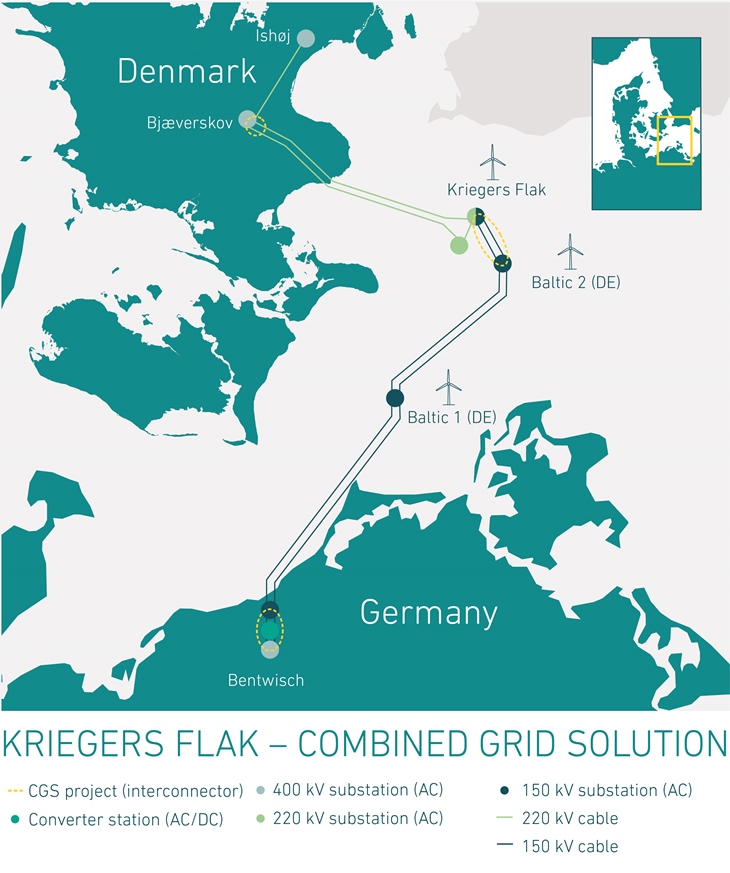 The Kriegers Flak - Combined Grid Solution project has connected the Danish region of Zealand with the German state of Mecklenburg-Western Pomerania via two offshore windfarms, German Baltic 2 and Danish Kriegers Flak. It is an innovation in the context of the energy transition, as it is the world’s first project combining grid connections to offshore wind farms with an interconnector between two countries. The interconnector allows electricity to be traded in both directions - from Denmark to Germany and from Germany to Denmark.

Construction work began at the turn of the year 2016/17. The Combined Grid Solution has become operational 15th December 2020.

The Kriegers Flak (Denmark) and Baltic 2 (Germany) wind farms are less than 30 kilometres apart and both wind farms are linked by means of two sea cables with a transmission capacity of 400 MW - forming the interconnector.

The frequencies of the Danish and German transmission systems use a slightly different phase, which means they need to be matched at the interface. This is enabled by two serially connected voltage source converters (VSC). One converter transforms the alternating current (AC) from the Nordic interconnected system to direct current (DC). The other converter transforms this direct current back to alternating current - only now adapted to the Continental Europe Synchronous Area. This so-called back-to-back converter is installed in Bentwisch, near Rostock in Germany. Constructing the back-to back converter on land is economically beneficial and allows for easier maintenance compared to the installation on an offshore platform.

Due to the different voltage levels of the Danish and German grid connection (150 to 220 kilovolt), a transformer is installed on one of the Danish offshore platforms.

Film about the project

The project will receive funding up to 150 million Euros from the European Energy Programme for Recovery (EEPR).

The rollout of the energy transition requires adapted energy industry architecture not only in Germany and Denmark, but throughout Europe. In the future, ever more flexible systems, interconnectors and storage solutions will be required to compensate for the fluctuating power generation of weather-dependent wind and solar power plants.

Transmission grids are of central importance here: high-voltage power lines form the backbone of the power supply in Germany and Europe. Electricity is less often generated where demand is highest, and more often where the climatic and geological conditions are optimal.

At the same time, however, the high level of security of supply and grid stability should be guaranteed. The exchange of electricity between neighbours is an effective means of ensuring both of these targets. The Kriegers Flak - Combined Grid Solution will fulfil exactly such a bridging function between Germany and Denmark and guarantee several hundred megawatts of additional electricity exchange between our countries.

The new interconnector will further increase the security of supply of both transmission systems. Moreover, the new link facilitates the integration of regionally generated renewable energy in Germany and in eastern Denmark, increasing its use.

The Kriegers Flak - Combined Grid Solution is a hybrid system. On the one hand, it is responsible for the grid connection of the offshore wind farms.On the other hand, it connects the transmission grids of Denmark and Germany, thus enabling transnational power exchange. Therefore, in strong wind the full capacity of the sea cables can be used to feed the offshore generated wind power via one system into two grids. However, if only a relatively light wind blows in the Baltic Sea, the residual capacity of the cables serves to exchange electricity between the two countries. Platform and subsea power cables are thus optimally used regardless of the wind on the high seas. This is the first system of its kind worldwide.

To control this complex system, a newly developed Master Controller for Interconnector Op-eration (MIO), using the latest information technology, will be installed in the Transmission Control Centre in Berlin/Neuenhagen.

The Master Controller will serve as the "brain" for the whole system. It

• calculates the available capacity of the interconnector (wind forecasts),
• prevents overloading by controlling the converter and/or wind farms,
• maximizes feed-in from the wind farms through active system control (936 MW are pos-sible),
• controls power exchange between the grids of both countries using the converter.

In this way, the infrastructure of the wind farm connections and the interconnector, in particular the sea cables, can be fully utilized, which also has a price-dampening effect on the consumer.

The expansion of one of the two Kriegers Flak transformer platforms at sea is required for the interconnector project. The cables from all wind turbines in the wind farms are connected to the substation on the transformer platforms themselves. There the voltage is transformed from 33 to 150 or 220 kilovolts (kV) for efficient onward transportation.

Along with the additional transformer, the extension of one of the transformer platforms serves as an interface between the German grid (150 kV) and the Danish grid (220 kV).