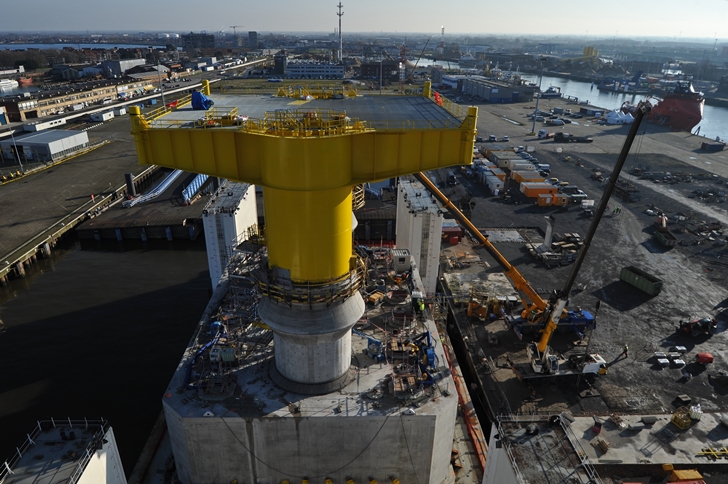 Foundation for the Kriegers Flak platform

Foundations for platforms are ready

In Oostende in Belgium the two foundations for the platforms at Kriegers Flak offshore wind farm have been assembled and are ready for shipping.

Two transformer platforms are being prepared for the future Kriegers Flak offshore wind farm. The largest of the platforms will also be the connection point for the German and Danish electricity grid in the new interconnection - Combined Grid Solution - between the two countries.

In the port of Oostende the project has just reached another major milestone, as the foundations have been assembled and are almost ready for transport to the Baltic Sea. The assembling operation took place on 29 November 2017. The operation is finished and both platform foundations have been assembled. The two foundations are weighing approximately 8.000 and 10.000 metric tons excl. ballast material. The steelwork and the concrete base must fit like a glove.

The concrete bases have been cast directly onto a semi submergible barge. From Oostende, the barge will sail north of Jutland, Denmark, to the Baltic Sea. The barge will wait near the site for the right weather conditions for placing the foundations on the seabed. At the location at Kriegers Flak the barge will submerge, and the entire barge will sink several meters. Then, the huge foundations will float and can be pulled off the barge and lowered onto the seabed by controlled filling with water. Preparations for the sail away.