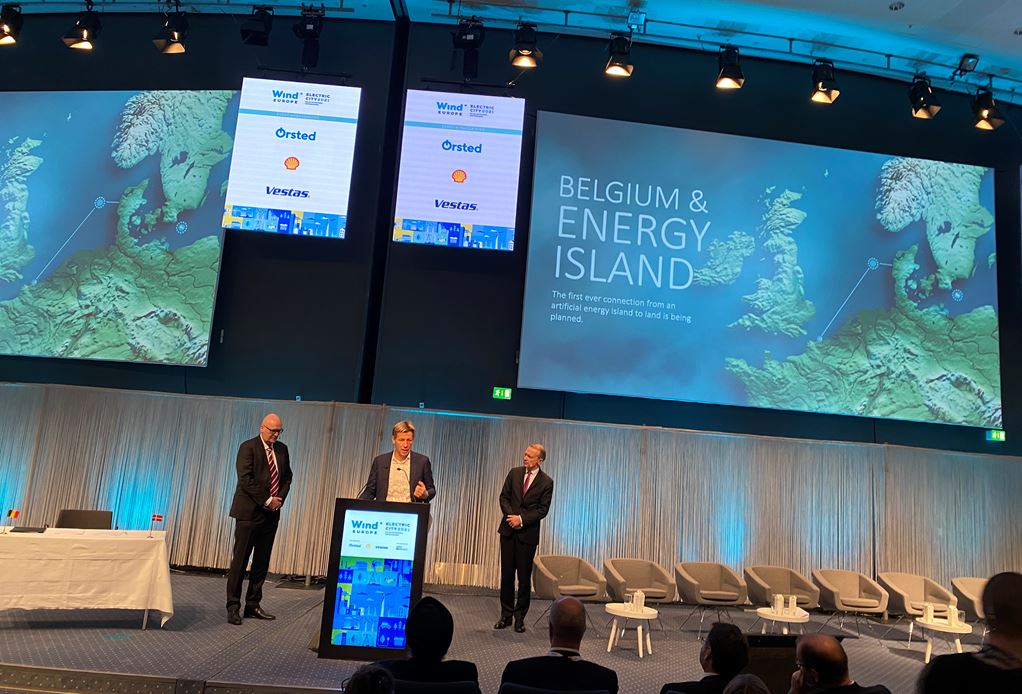 Commitment to cross-border connections is needed for energy islands in the North Sea and the Baltic Sea to provide the greatest possible value. The connections will boost large-scale, offshore electricity generated by wind turbines in the European electricity system, replacing fossil energy to a great degree. Today, connections from the Danish energy islands to Belgium and Germany moved a big step closer.

Today, Elia Group and Energinet signed two new cooperation agreements: One between Energinet and Elia that moves an interconnector between the Danish energy island in the North Sea and Belgium a big step closer, and one between Energinet and 50Hertz that brings a connection between the Danish energy island Bornholm in the Baltic Sea and Germany much closer to realization. The agreements were signed by the three companies' CEOs at the WindEurope Electric City 2021 conference in Copenhagen.

A meshed grid connected to several countries is important to transport renewable energy from the large offshore wind farms and energy islands to consumers around Europe and also crucial in providing the greatest possible value in relation to zero carbon electricity.

"I see the cooperation agreement as a big step towards Danish energy islands becoming a reality and with huge gains for a greener Europe. Today's agreements show not only that the whole idea of energy islands and connections to several countries is a good idea, but also that the countries are very keen to implement the huge offshore wind projects. It's a big day that brings the energy islands with neighboring countries one important step closer" - Thomas Egebo, CEO, Energinet.

The agreements mean that the three TSOs now specifically cooperate on, among other things, the initiation of feasibility studies and the business cases that are to be used as a basis for national approvals in Belgium, Germany and Denmark.

"The realisation of the Belgian-Danish cable is an important next step in making our electricity system more sustainable. Thanks to the hybrid technology, we will have direct access to large wind farms in the far northern North Sea with different climatic conditions. This will provide greater security of supply and help our energy-intensive industry to further decarbonise. In addition, we will continue to pioneer innovative technologies, giving our companies an edge on the international stage" - Chris Peeters, CEO Elia Group.

The new and more binding cooperation agreements are the first steps towards final investment decisions.

"The Bornholm Energy Island project builds on the good cooperation between 50Hertz and Energinet that exists between our companies over many years now. The world's first hybrid interconnector, Kriegers Flak - Combined Grid Solution, which was commissioned last year, now connects Danish and German wind farms. With Bornholm Energy Island, we now want to go one step further and realise the first real electricity grid hub for the Baltic Sea. This is technically and economically demanding, but together we will master this challenge". - Stefan Kapferer, CEO of 50Hertz.

Political agreement on the energy islands
The cooperation agreements were signed at the same time as the Danish Minister of Climate, Energy and Utilities Dan Jørgensen and the Belgian Minister of Energy Tinne van der Straeten signed a formal political Memorandum of Agreement to establish a connection between the countries incl. the Danish energy island in the North Sea. Andreas Feicht, Head of Secretary at the German Ministry of Economic Affairs and Energy, also took part in the signing ceremony and put a few words into the prospects for cooperation in the Baltic Sea between Denmark and Germany. All three stressed the importance of large-scale wind production at sea and meshed offshore grids to reach the goal of zero carbon energy in Europe.

Also Giles Dickson, CEO of Wind Europe, stresses the importance of both the agreements between the three TSOs and the political agreement.

"Offshore wind is entering a new era. Connecting offshore wind projects to more than one country will improve electricity flows across Europe. By pooling generation and transmission infrastructure these "hybrid" offshore wind farms reduce costs and save space. Today's announcement from the Elia Group and Energinet is good news for Belgium, Denmark and Germany - and for all of Europe. We will need many more of these hybrid projects". – Giles Dickson, CEO Wind Europe.